I’ve taken up running, under the cover of darkness, first thing in the morning as I know that if I don’t do it then, I will just not do it! I’m using the Couch to 5k app which is amazing. I’m on week 3 and running away. I do feel so much better for it, I’ve also noticed an improvement in what I get done every day. It appears that this is not just in my imagination.

I was shocked to read that I am making less brain cells than ever before. Apparently, this decline starts in the mid-twenties and continues a downward trend. But, those who exercise slow down this process of loss so could have more brain cells than those who don’t. I decided that I need to take action to do what was necessary to protect what I had.

Quick science: in our cells we have mitochondria where all the energy for the cell is generated and a chemical called ATP is produced. Exercise stimulates the development of new mitochondria so this means that the body can produce more ATP  which in turn gives more energy for you and most importantly, for your brain. A nine-month study of 80 business people showed that this who exercised experiences a 22% increase in fitness and a 70% improvement in ability to make complex decisions compared to their peers who didn’t exercise.

Dr Ratey, the author of “Spark – The Revolutionary New Science of Exercise and the Brain”  describes exercise as “miracle-gro” for the brain as exercise causes increased blood flow and improved levels of the brain-derived  neurotrophic factor or BDNF which have a vital role in brain cell growth, mood regulation and learning.

Each time I run, I also get a burst of serotonin (which increases my mood), dopamine (which affects my learning and attention) and norepinephrine which influences perception, attention, motivation and arousal. The sum effect of the increased levels of these transmitters is that I am more focused, feel better and less stressed about the world. 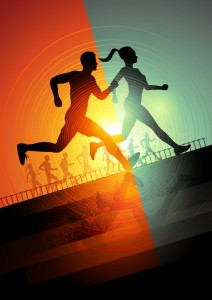 Finally, a recent Harvard Business Review study found that those who had a regular exercise routine had less trouble finding an successful work-life balance. This may be due to the improved time management skills and the ability to juggle the demands of work and home. Just as well really, as I’ve had a busy week and been able to keep on top of everything so I’ll keep on running.

Feel fitter and more able to cope with what life is currently deciding to throw at me. The house sale and purchase has stalled so my running really helped manage the disappointments and plan the future.

Felt proud of my new team member who has made a massive start to her business.

Found that sorting things out and giving what I don’t need to charity is a very cathartic experince.

Have a great day!

5 Reasons Starting a Business Made Me A Better Person

What do you think? Cancel reply